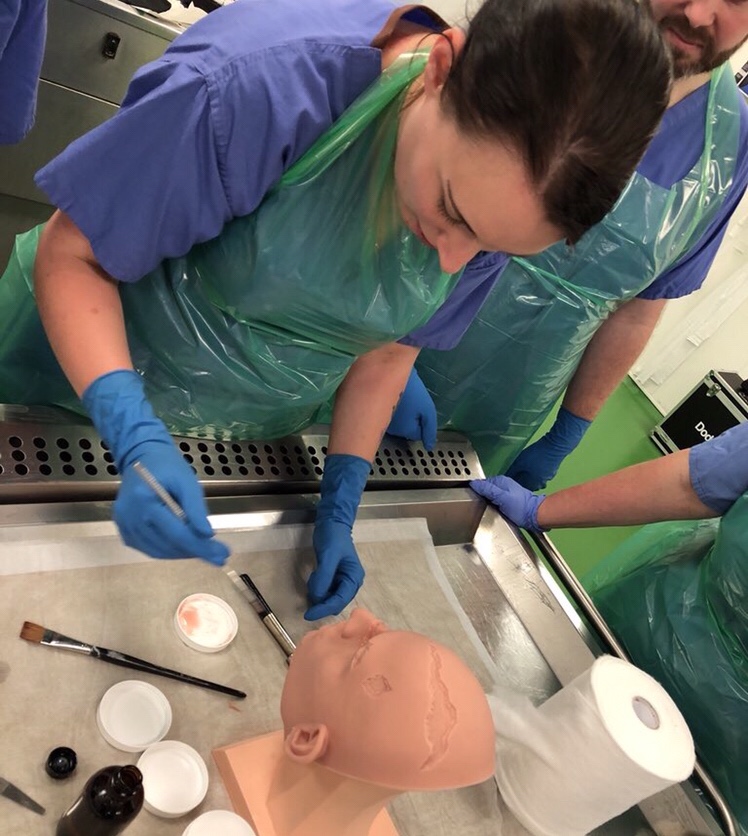 Last Friday the 8th June, my manager and I rushed out of work at the end of the day from the mortuary and bundled into my little yellow car. I plugged Eastbourne District General Hospital into Google Maps and off we set on a nearly two hour journey towards the south coast. We were not in for an evening of fish and chips or seaside fun but for something far more exciting. We were attending the AAPT South East Regional Event which was a Suturing and Cosmetic Application workshop.

I wasn’t certain exactly what we had in store for us when we were done travelling. I was singing along with Magic FM while pondering what we might get up to. I had images of suturing up fruit like oranges or bananas in my head but really I wasn’t sure.

Upon our arrival at the mortuary in Eastbourne we were greeted with friendly smiles, some familiar faces and trays of Subway sandwiches which were very welcome after a two hour drive and having eaten nothing since lunch about 6 hours previous. After some time chatting with the other attendees we headed off to change into scrubs and get into the post-mortem room for the workshop.

Ben from Dodge was hosting the event and had laid out some of his different products and tools that he uses in his work. There were several sizeable cases of equipment around, and two post-mortem tables with a covered up ‘lump’ in the middle. We first were shown a slideshow with a few videos and pictures of the products we would be using. In effect, they are a powder and a liquid that are mixed to produce a paste or putty depending on consistency. This can then be used to fill or recreate parts of the body with a spatula or your own hands. In order to keep it pliable and clean, another liquid called Dry Wash is used and a brush is used to ‘feather’ the substance into the surrounding area and blend it in. We use Dry Wash at the mortuary currently but to kill any maggots or destroy any fly eggs on the people we receive from outside. Lastly the powder is applied to the top of the area and the product is allowed to set into a latex like texture. 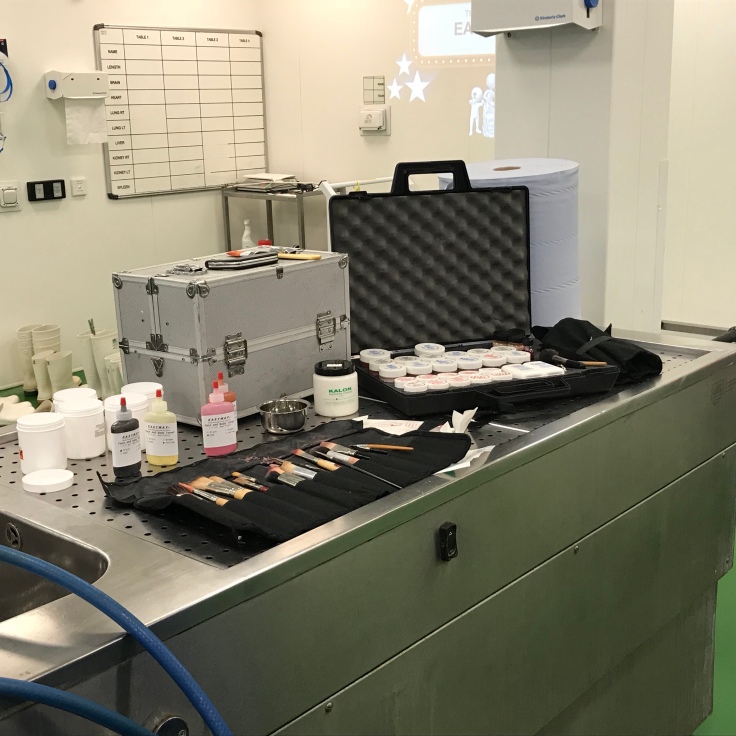 After the presentation we were divided into two groups and each group shown to one of the post-mortem tables. The lumps on the tables were revealed to be lifesize plastic model heads with a series of injuries including missing ear lobes, lips, lacerations to the nose, brow and scalp. We were given some of the product to use and told to have a go at one of the injuries present.

Poor plastic head man with all his injuries!

My group looked at each other in the way all groups do when asked to do a task in a workshop and then hesitated about who to go first. My brain goes quite quickly in these situations from ‘No way am I going first’ to ‘Oh go on then’ so I stepped forward. Trying to decide which injury to tackle was difficult because I didn’t want to attempt one that was too ambitious but I also didn’t want to pick a super easy one that wouldn’t be a challenge whatsoever. I settled on a cut of the bridge of the nose that was slightly more difficult in that it went across the face and had some tricky angles.

Mixing the product is harder than it looks, you need quite a lot of powder to make not very much of the pliable substance. I filled the gap carefully with the spatula and looked at what I’d done, there still was a dent in the nose just now a smoothish one compared to a ragged cut. Ben came over and explained that it could be completed in stages and I could come back to it once the original layer has hardened and apply another one on top. So I stepped back and let the other people in my group complete their injuries while I waited to go back to mine.

While we were working, Ben showed us how to add coloured pigments to the product to match the skin colour closely, so we ended up with pink, yellow and brown patches on our head where we had tried these out. He also showed us how to make a slightly stiffer substance so it could be moulded into shapes like lips and ear lobes. I did go back to my nose and I was pretty pleased with the result in the end!

To round off the talk, we had another presentation from Ben but this time about suturing and the different types. He explained how each of the sutures work and how they differently close the skin. I had only really seen one stitch before so this was really fascinating to learn about. He also showed us some of the different cosmetics used and how to build up colour on his own hand using the different shades available. It made me laugh that my own hand was so bruised from my traumatic blood test I could’ve done with some of that cover up!

I had a great evening at Eastbourne District General Hospital and I would like to thank all of those who organised, attended and made it a fabulous time. Definitely want to attend more things like this in future!

Hope you’re all having a great week so far and thank you for reading.

5 thoughts on “Reconstructing Faces in Eastbourne”