At the weekend I had the absolute pleasure of spending most of my time within West Brompton cemetery amongst the graves and shielding from the rain on Sunday in the chapel. I’d inadvertently chosen two events to attend that interested me for different reasons but ended up being very close to my heart for the same reason. In some ways I’m glad I don’t look too much into events before I attend so I can have nice surprises like this. In other ways I felt very naive for not realising! 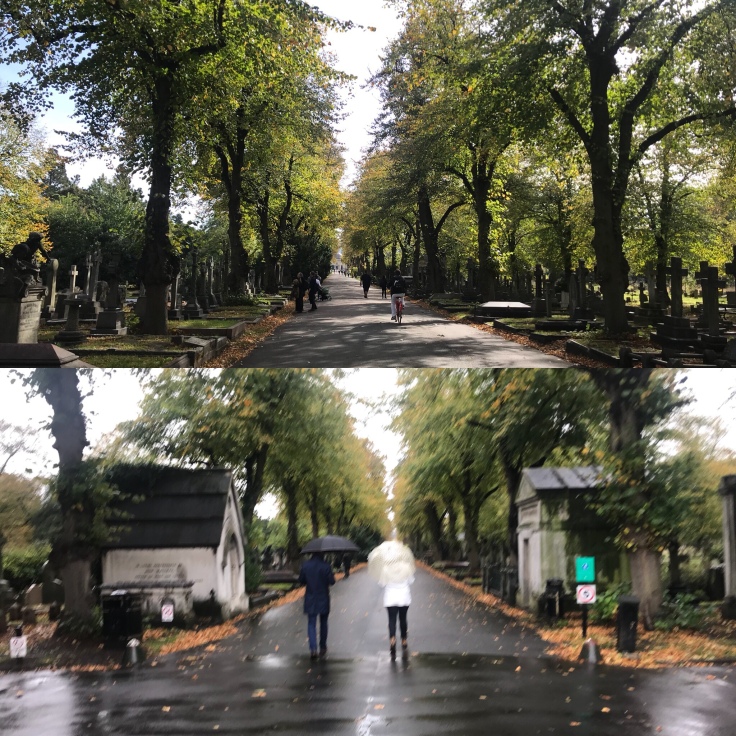 What a difference a day makes! Bright sunshine to dreary rain. Definitely made for a different atmosphere in the cemetery each day.

In the sunshine of Saturday, Laura D and I attended a double session of talks on the topic of the Crossbones Graveyard in Southwark. Long time readers might remember I wrote about this graveyard previously as it used to be a favourite lunchtime spot when I was working at Guy’s Hospital. In the mizzle of Sunday we went to a talk discussing the mass graves of Spitalfields, something I thought would be historical and interesting. However, it proved that both talks had a large, if not complete, basis in archaeology, and those that know me well will know I have an archaeological background. 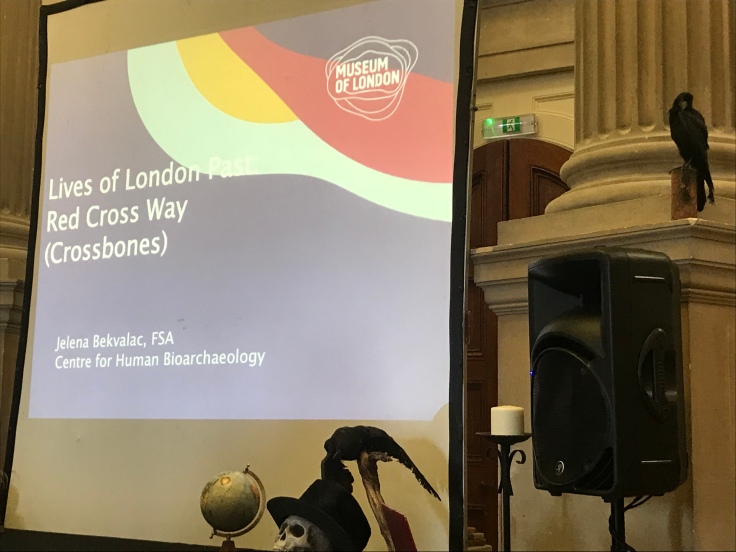 I won’t go into too much detail as always, because I want to encourage you to go to talks and I don’t want to ruin any future ones for anybody. That and it doesn’t seem fair to the speakers to tell you all about their work. However, the Crossbones talk was a brilliant contrast to Spitalfields and I will explain why.

On one side you have a relatively unknown graveyard that was saved from being destroyed entirely due to the work of the community and those who fought to save it. This largely came through the work of the second speaker of the day, John Constable, who wrote a book titled Southwark Mysteries and has a lot of his work based around the figure of the ‘Goose’ who would have worked and lived in the area of the time as a sex worker. Jelena Bekvalac spoke intitially on the collection of 148 individuals who were excavated from this site and are now looked after by her at the Museum of London in Barbican. Her detailed analysis of the demographic of the individuals and some of the insights their bones gave to their lives were really fascinating. It’s hugely important to note that this was only a partial excavation and there were a lot more than 148 people buried there, although many have probably been destroyed or removed by buildings on the site previously.

Some interesting decor by the sponsor Hendricks gin

On the other side, the Spitalfields excavation that Don Walker from Museum of London Archaeology presented was more complete. Thousands of skeletons were removed and the site now has the market on top, although you can visit today and still see remnants like the priory. The research project into this excavation was lucky enough to be funded well, so they were even able to carbon date a lot of the findings. This allows much more precise dating than normal, and meant that certain assumptions about the period of burial were not made and therefore something much more exciting happened in the research into why there were so many mass graves at that time.

It was odd but lovely hearing about archaeology again. About stratigraphy, matrices, site codes, and even a little mention of hypoplastic defects (I might have written a whole 15,000 word dissertation about those delightful little things! I also have volunteered for both the Museum of London, although at their Docklands Museum, and also for MOLA but at their archive in Eagle Wharf Road. It was great in addition to bump into two of the hosts of the Dead Kids Club podcast too and say hello to them! They’re three PhD students from UCL where I studied who discuss different archaeological stuff together in a great podcast. You can listen to it where you get your podcasts, for example here.

So the London Month of the Dead is about halfway through now and I’ve loved the events so far. I think most of the events are sold out but it’s worth checking out what’s available and get yourself to a talk if you can! We have a couple left and I will let you know about them when we’ve attended.