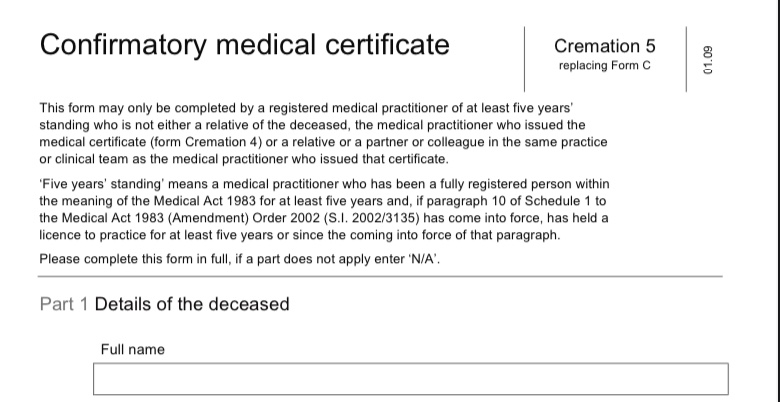 As mentioned in my previous posts, I have planned on covering the forms for cremation from the start but covered the initial (and somewhat more straightforward) forms first. Cremation forms can seem complicated in nature, but once you understand the principal behind them they are easy. Firstly, there are 13 official cremation forms used in the UK which cover different scenarios. The important part of that fact to remember is that not all 13 are needed for a cremation to happen, and in fact a fraction of these are needed for any deceased. In this first post I will be covering 1-5, this will be a long post but hopefully will be interesting in many ways. I will cover 6-13 in another lengthy post next week or the week after depending on how long I need to write it.

Cremation 1 is the initial form for many and it is the application for cremation for a person. This is usually filled out by the next of kin of the deceased or executor of their will requesting permission for the cremation to take place and must have all the known details of the cremation including the name of the crematorium where it will happen and the elected funeral director if being used. Direct cremations are possible where you do not use a funeral director, and are becoming more common as funeral costs rise.

Cremation 2 is the form that is an application for any part of a deceased person. This could be used for amputated limbs for example, or for samples such as those taken for histology at a post mortem. Sometimes, for religious purposes, limbs that are amputated are kept to be reuinted at death or buried where the person will be buried when they die. Otherwise, if requested, an amputated limb can be cremated. Any samples taken can be treated the same, samples taken at post mortem can be from any or all of the major internal organs and can be numerous in some cases. In regards to size they are nearly always no bigger than a postage stamp, but when they are taken there is a decision made by the next of kin as to what will happen to those samples. To instruct this decision the next of kin will complete a form requesting they are either reuinted, retained for research or disposed of. We know this as the HTA (Human Tissue Act) form which we must have completed for all samples taken.

Cremation 3 is the form that is used for applying for the cremation of a stillborn baby. This is usually completed by a parent of the baby, and is similar in format to the other application forms. These application forms (1-3) allow the person applying to indicate what they want to happen to the ashes once they are available. Ashes can be interred or scattered at the crematorium, collected by the person applying at a later date or held pending a decision at a later date.

Cremation 4 and 5 form the medical certificate which allows for cremation. Part 4 is completed by the attending doctor which could be the GP of the person or the doctor attending to them at the hospital where they died. In this form they state the cause of death and permit the cremation certifying that no futher investigation is needed. This form also importantly confirms the presence of any medical devices which may need to be removed before cremation can happen. Pacemakers, for example, have been known to cause explosions in crematoriums when not removed from the deceased and exposed to the heat.

Part 5 is completed by another doctor but cannot be one who has treated the patient or is related to them. They can also not be related to or work with the doctor who completed the Part 4. This form was introduced to prevent any abuse of the system by the doctors, something that came into light as a reality with the numerous and awful murders commited by Harold Shipman through the latter part of the 20th Century in the UK. He murdered a huge number of his patients in his care, completing the cremation forms accordingly and assuring that he could not be caught for over twenty years. It was considered that through introducing the Part 5 of the cremation form structure, Shipman’s crimes would have been noticed a lot sooner by the sheer number of cremation forms he was completing.

Coronavirus changed a great number of aspects of our lives which continue changed even now, it too changed the way in which death paperwork was completed. Cremation 5 was withdrawn as part of the Coronavirus Act earlier this year, part of a plan to try to speed up the death paperwork process and prevent any cremation taking longer than necessary. As far as I am aware, there is no current planned date of when this will be reinstated. However, with the current implementation of the Medical Examiner process (an independant review of all non-Coroner investigated deaths) there is another safeguard in place in a growing number of areas in the country. The full Medical Examiner roll out is expected to be completed by April 2021.

As always, if you notice any errors or omissions with this please get in touch.