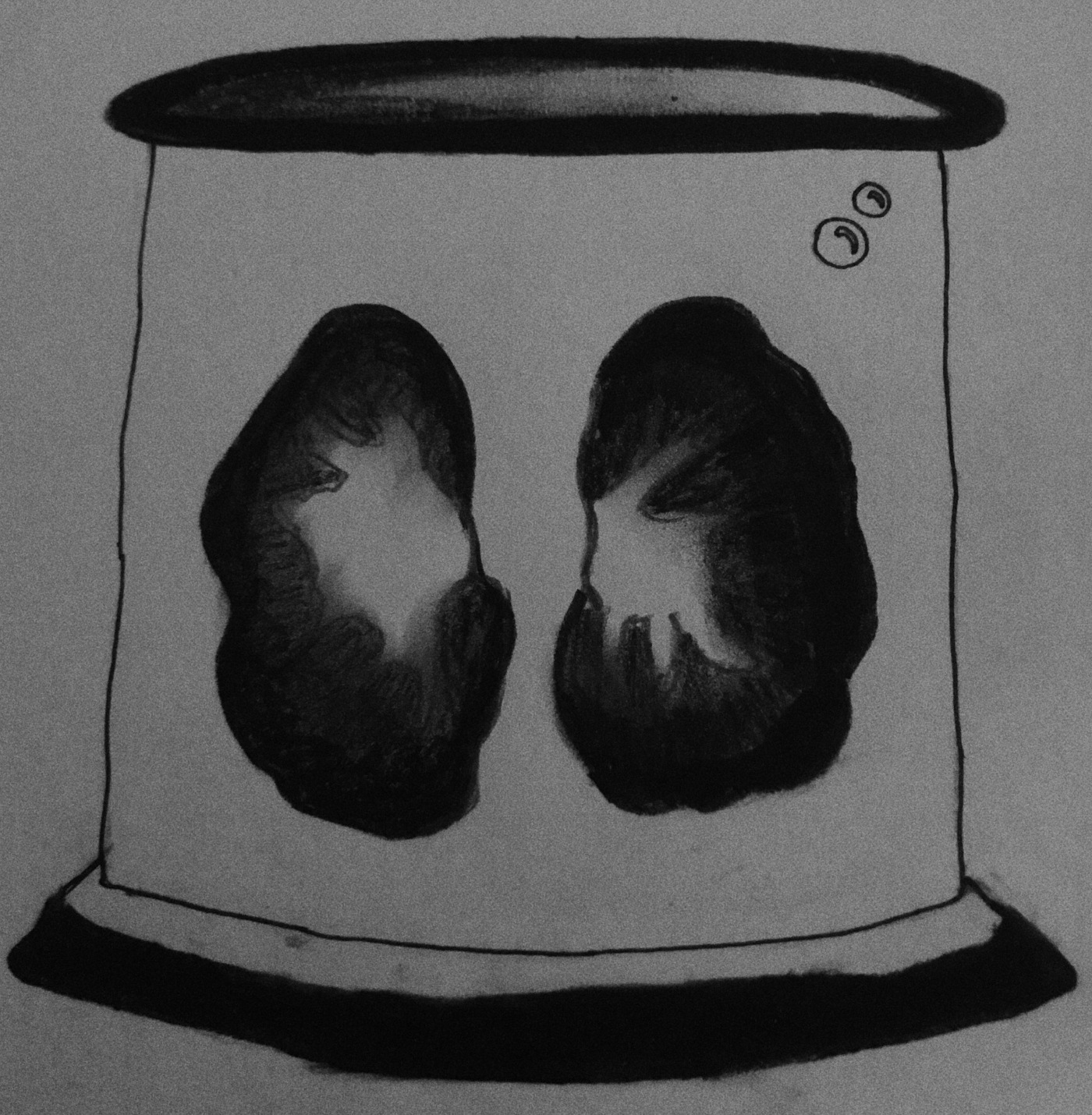 I can only apologise for my lack of posts recently, it feels like ages since I’ve posted anything particularly informative other than my regular weekly updates! I have been distracted by my life outside work of vets visits for my poor cat Rockstar who had me worried senseless alongside some other life stuff. I’d love to say I’m on my way back to some kind of normality at some point but who knows! 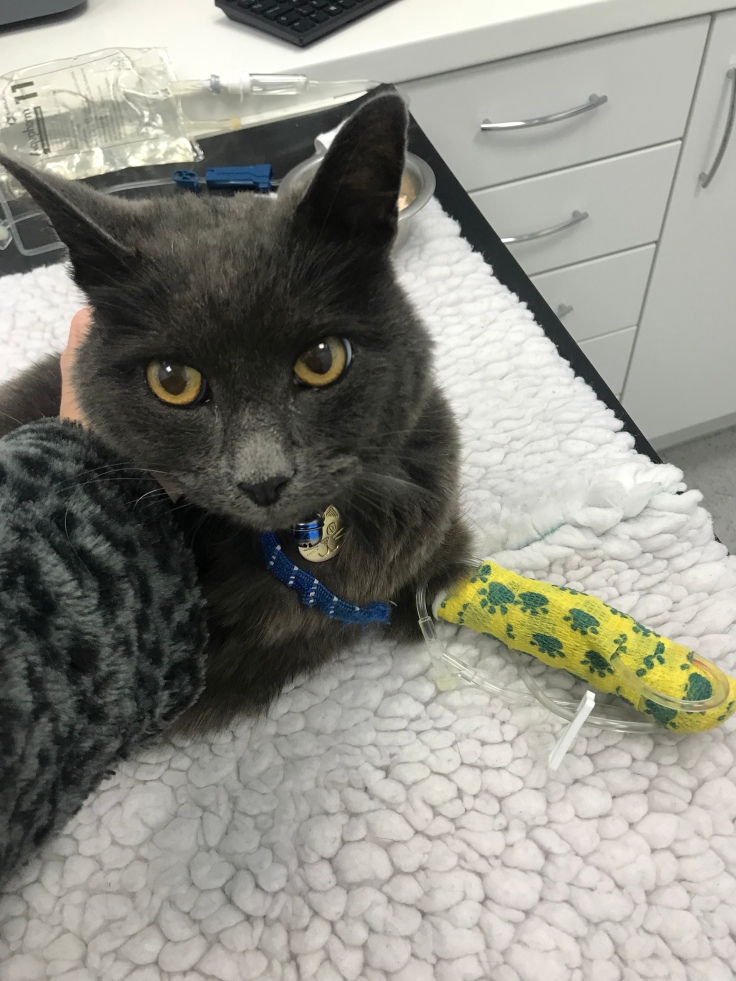 For now, I’ve got some time so let’s look at one of the body’s most interesting organs (my own point of view) the kidney! I’ve had some of my own kidney issues in life, namely multiple kidney infections including one time in Greece on an Archaeology trip where I ended up urinating in a plastic cup in a doctor’s house and walking past his family watching tv holding it. That time I had pain so bad I vomited and I think possibly hallucinated. Some say kidney pain can be as bad as childbirth, I can’t comment having only experienced one but it was a pretty rough time. 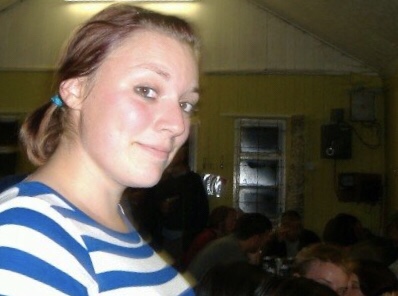 The little kidney is a thing of wonder. You need only one functioning one to live but it has to work. Without that you need dialysis to keep you alive or a full on transplant. On a basic level your kidneys filter your blood and remove out waste alongside fluid which produces urine. The urine travels to your bladder and its removed when you urinate. There’s a highly complex structure of nephrons (the tiny parts that do all the hard work) and a filtration system that works together to do this. They are bean shaped (hence kidney bean!) and look kind of smooth and purple when healthy. Inside they are often a yellow or white. The pathologist removes them from the fat they reside in during a post mortem and has to separate them from a capsule that surround them, often by sliding a finger around them. They sit nearby the adrenal glands that produce necessary hormones, including that lovely stuff called adrenaline. 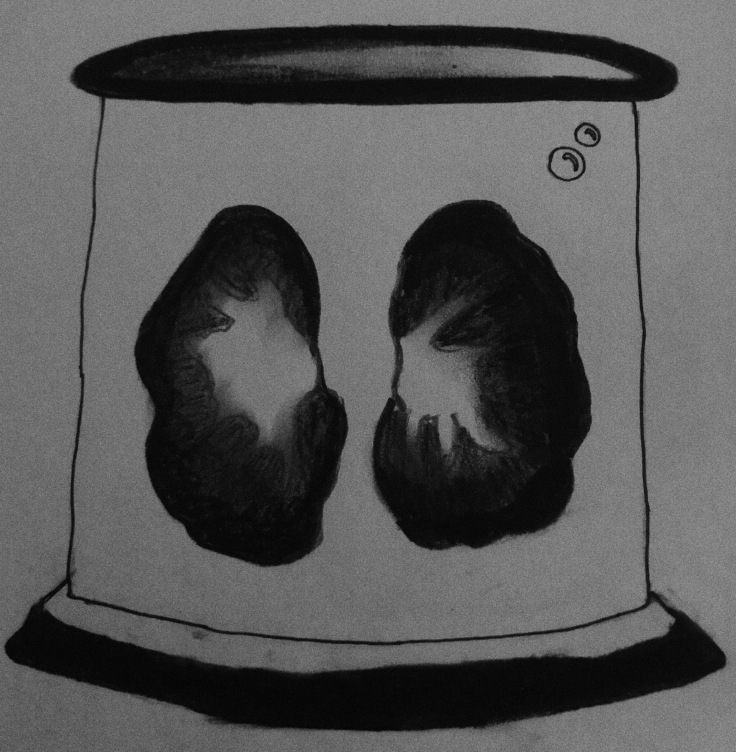 My drawing of a sectioned kidney in a jar for display

Sometimes the kidneys have cysts on them that can be quite large and burst when removed. These are known as cortical cysts and are generally harmless unless affecting the function of the kidney. I’ve seen quite a few, and a couple go pop. I’ve also seen kidney scarring where the surface is pitted or mottled rather than smooth. Again, scarring can be harmless and is caused by numerous trauma or conditions in the kidney, unless the scarring affects the function. I once asked the pathologist if all my infections would have scarred mine but truth is I wouldn’t know without taking a look, and I’m not that desperate to know.

This week I was lucky to see an example of a horseshoe kidney, where the two kidneys are not separated as normal and are linked at the bottom in a U shape. This can be completely harmless in people and you may have this without even knowing. It can cause some symptoms but there is no known solution. According to Wikipedia it’s a 1 in 600 chance of having this and is more common in men than women. There’s more information and images on Wikipedia.

In some cases, people are born with only one kidney, or only one functional kidney and one kidney that is not functional. In this situation you may, once again, never know you have this. It is possible to never have any problems! I myself know that I don’t have this because I had several scans in my early twenties to find out. Unfortunately I have abnormally short ureters from my kidneys to my bladder that allow infection to travel upwards. Hooray for anatomical abnormality, a slightly sarcastic but there’s no denying they are extremely interesting. The best I can do is ensure I take care of bladder infections or UTIs (urinary tract infections) effectively and drink lots of water. I was also advised to not have baths and avoid citrus or caffeine among other things.

Lastly I’d like to mention kidney transplants. I think the coolest things about transplants are twofold. Firstly, you can donate a kidney while alive and well, and live a normal life after. It’s one of the few things you can give as a living donor. As said above, you only need one functioning kidney to survive. Secondly, they do not remove the non or poorly functioning kidneys of the recipient and they can end up with three or even four kidneys in total. I think someone once even ended up with five (something I think I saw on QI episode once upon a time!). There’s more information on kidney donation on the NHS website.

Aren’t kidneys great? I had a love/hate relationship with mine for a long time but I can only be grateful they do work well most of the time. Give yourself a little pat on the back (pretty much just below your ribs) and thank your kidneys for the hard work they do!

Tomorrow I am off to the AAPT annual conference in London, and I’m very excited! This is how it all began a year ago when I started my career, and I can’t believe how much I’ve progressed in a year. I will write an update shortly after so keep an eye out.