You might have already seen that my very exciting news last week was that I was approached by a BBC Radio producer to appear on a Radio 1xtra show about death on Sunday night. I was incredibly apprehensive but knew it was too good of an opportunity to refuse so anxiously I went along. Originally, crossed wires meant I was on air a lot longer than I thought I would be, I was not the only guest as I thought and that it was broadcast live! At first I thought it was recorded to be broadcast later and that the documentary parts of the show were the main bulk of it. As terrifying as it was, the team there made me feel really relaxed and even though I sound nervous at the start and at one point my mic wasn’t switched on and I was talking, I really enjoyed the whole experience! If you would like to listen, it is available online here. We discuss how Death Cafe’s work, how they help people and what is involved.

The host Reece Parkinson, the other guest Angel and myself in the studio after the show.

This week I have managed to finally sort out my workspace at home and I’m really pleased with the result. I needed an area where I could work on my course and also any other computer work I needed to do, but somewhere quiet and where I could concentrate. Luckily one of the reasons we bought our house was a really neat little feature of a mezzanine loft extension area which I’ve now decked out with a place to relax and folding desk with chair for my work. There’s even a little heater for when it’s cold and space for all my folders and books. I’m so chuffed and happy it’s completed before I start my course at the end of February.

My little safe space to retreat to!

Wednesday evening there were two important death related shows that I can thoroughly recommend. On BBC Radio 4 at 8pm, We Need To Talk About Death about the role of the Coroner in unexpected deaths that a Death Cafe attendee pointed me in the direction of. This is a topic that was recently raised at our Death Cafe and something I think requires a greater clarity for people. Then at 9pm on BBC 2 a Horizon programme called We Need To Talk About Death with Dr. Kevin Fong which mainly explored the relationship between palliative care and traditional medicinal care for patients nearing the end of their life. I can thoroughly recommend both, the first because I learnt a bit more about how families may feel for our community cases that we receive, and the latter because I never knew how palliative care worked or how it is used so effectively. I also found the hospice scenes absolutely fascinating. Have a listen/watch and let me know what you think. They can be found on BBC Sounds and IPlayer respectively. 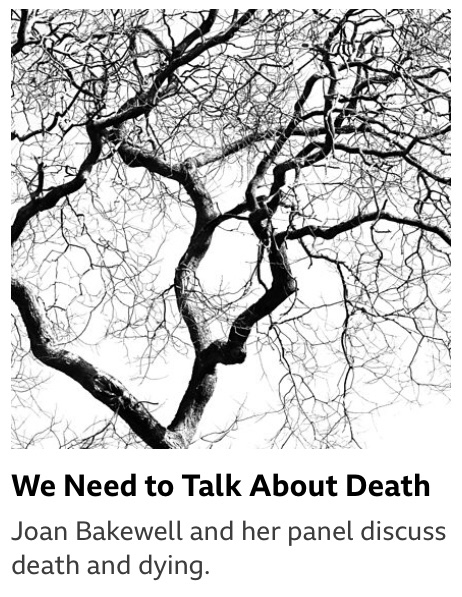 An interesting radio show highlighting the emotional reaction and the Coronial reaction to sudden deaths.

A brilliant documentary about the importance of planning and thinking about the kinds of care we receive towards the end of our lives.

Finally, this week I have been starting to make plans for Dying Matters Week 2019! This year it runs between the 13th-19th May and I’ve been planning some ideas for myself and discussing some potential activities at work at the hospital. I’m hoping to make the most of the week and get everyone I know talking and thinking about death, I’ll use any excuse really. If you would like to get involved in any way please let me know.